In this fantastic profile interview we meet the amazing Harriot Pleydell-Bouverie, founder of Mallow and Marsh,  business that literally took her by surprise!
Please tell us what is a typical business day for you?


I don’t think I have a typical day yet. Mallow & Marsh is just launching, so my days are spent juggling everything from being sat in our storage unit packing boxes to meeting with the senior buyers at Sainsbury’s. It’s pretty mixed. As a one person company the buck stops with me on absolutely everything, so I have definitely become a bit of a jack of all trades, as I jump from Accountant, to Sales Director, Chef, CEO, Admin Monkey and Design guru. It’s a never ending circle and I wouldn’t change it for the world.


My phone is permanently charging yet always out of battery, and I rarely arrive on time for social evenings.


What made you start the business and how did you get started?


I have always dreamed of launching a business. At school I was the kid that bought in a ton of chocolate before Easter and sold it on to the other kids. However, when it came to it, I found myself working in the city, and although I enjoyed the company and people, I always knew I wanted to do something else, something that was mine. 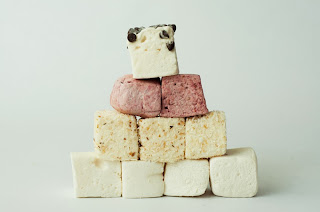 I initially launched a company called De Bouverie –an internet based company which brought independent designers together on a community platform. Things were going well and I went to develop my skills at a start up weekend in September 2012. At the event, I was challenged to make some marshmallows, which I brought in the next day. I have never seen a response like it - the feedback and enthusiasm was amazing. I couldn’t stop thinking up new ideas and began experimenting with flavours and textures. Marshmallows just got under my skin and before I knew it Mallow & Marsh was born.


There was nothing out there similar to what I wanted, and I realised you just couldn’t buy good marshmallows. I was lucky in that I was already working for myself and could split my time accordingly but it happened so fast. I made up a few batches and sold them to friends and family, and before I knew it I was stuck in my kitchen cooking and had corporate orders coming in and I got a stand at Jamie Oliver’s Food Revolution. For me it was about being passionate about marshmallows and being prepared to work very long days. Within 2 months De Bouverie was being closed down and I was turning my hand to marshmallows full time. It was a very quick transition.


What would you say has been your greatest accomplishment in the business world to date? 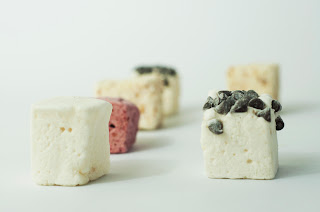 Very early on in the company, I applied for a competition called Pitch up with Sainsbury’s. It was a chance to pitch the Sainsbury’s buyers, and although I knew I wasn’t ready I thought it could be a great experience. A few months later I got the letter to say I was a finalist and that I was actually going to pitch them. I don’t think I left the office for a week, there was so much to prepare, and on the day I have never been so nervous. It was a great experience and I loved every second of it, but when I heard a week later that I had won I didn’t know what to do. It made everything so real and really took the business to a new level. So from a preliminary research start in March I had a 12 month contract with Sainsbury’s by September. Without a doubt that will be one of my best memories of all of this.


What has been your biggest challenge in business so far?


Throughout the summer I had planned to test my products and price range at markets, festivals and all things foodie. I was very excited and had a very busy diary of events and then the heat wave hit. The entire of England was basking in 30 degree heat and loving it. However, I was dying in a 46 degree kitchen and a mountain of mushy marshmallows. It turns out marshmallows 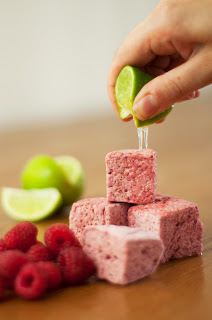 
It was a great thing to go through though. Had I launched and been a fully functional wholesaler by then I could have had major problems. As it was, I was able to figure out a way through the problem so that next year I wont have the same problems, and I only lost out on a few shows. My only wholesale client was incredibly considerate and understanding and helped me work out the problems. That is why its best to launch small and test the business first – as any number of things can go wrong that you can learn from and fix when your small but could break you as a larger business.


What are your future plans for the business?


Mallow & Marsh is only just getting going. We intend to show people what a real marshmallow tastes like, and make them accessible. They aren’t exclusive treats, but low fat, high energy cubes of delight!


Our sales strategy is only just starting and with a 12 month contract with Sainsbury’s already under our belt, interest from distributors, and an exporting opportunity, we intend to grow the company so that everyone can easily access our marshmallows. We have new flavours, a new product line and an enthusiastic list of retailers and events coming up – so watch this space!


If you had to do it all over again, what would you do differently?


Not really. Everything happens for a reason and you have to make mistakes along the way to learn from them. Each learning curve got me closer to where I am now, and right now the business and I couldn’t be in a better position and its only because of all the ups and downs we’ve been through to get here. Money is the only thing I would warn people to be wary of. I would spend less at the beginning and concentrate on sales and bringing money in before you grow too fast. You can be enthusiastic but sometimes you get caught up in the world of big businesses and forget that you don’t need everything a big business needs.


Why is it so important to inspire young women in particular to follow their dreams?


For some reason many young women have felt that business isn’t for them. They’ve been intimidated by hard talking men, and that false belief that you can only be a successful business woman if you are hard and have no emotions. This isn’t true at all. I spend my life dealing with 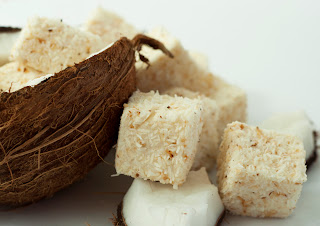 people who are only ever incredibly kind to me and people have quite literally bent over backwards to make things work for me and I haven’t got that from being nasty to people. I want to help banish the mirage that you have to be hard nosed and masculine to be successful and show young women that they can have these dreams and they can make them a reality.


Starting a business has nothing to do with whether you are a man or a woman. It has everything to do drive, passion, business acumen, and shear determination. No one should be put off because of whether they are a girl or boy, young or old. Having a dream is what living life is about and if that dream is business and entrepreneurship then you should grab it with both hands.


What advice would you give to somebody who wants to start a business in your industry?


You can always start a business for less than you think. My first business was a great learning curve for me, but the benefit of hindsight showed me that I could have done it for a lot less money. Cash is key so don’t let go of it unless you really have to. I managed to launch Mallow & Marsh off £250 a feat even I am surprised by. It goes to show anything is possible. Test the market slowly and sell sell sell, then grow once you know your product sells. Once you have proven it works, then look at the growth stage and a start up loan, or investment. Prove your concept first then grow.


What or who inspires you in business and why?


I think that anyone who goes out and does their own thing deserves a lot of credit, even when it doesn’t work, when you try it shows huge strength and courage. To me my mentor Charlotte Knight, founder of G’nosh is incredibly inspirational. She is both a mother and a business owner, she juggles a hundred different things and G’nosh has been growing from strength to strength. Despite being overly busy she always has time for me. She is one of the most determined, passionate and exciting people I know with an incredibly big heart.


My other main inspiration is food. I love food. I love everything about food. Be it sweet or savoury. So to think up new recipes, new flavour combinations or practise different ideas is less work and more pure heaven to me. Nothing like combining my passion with my job.


What is your favourite inspirational quote?


I also have a bit of a life rule that is - Everything will be ok in the end. If it’s not ok, then it’s not the end.
Contact details
W: www.MallowandMarsh.com
A: Floor 4, Farringdon House, 105 - 106 Farringdon Road, EC1R 3BU
T: @mallowandmarsh
F: www.facebook.com/mallowandmarsh