2inspire Network are one of the official sponsors of the  The 'Super Mothers Network',  2nd annual ball which is taking place on Saturday 8th December at  the prestigious Porchester Hall in Bayswater to celebrate a fantastic year so far and  to congratulate all the hardworking mothers out there.

The Super Mothers Network is an international network with members from London to America which was created to empower, strengthen, elevate and mentor women especially mothers and in particular those who raise their children alone. This amazing formation is rapidly growing seeing members with strong business backgrounds, from accountants and fashion designers to motivational speakers and publicists stand by the belief that to work together is to elevate one another. The Network have hosted a range of
uplifting ,character building, positive reinforcement  programmes and events including the first annual 'Super Mothers End Of Year Ball 2011' in December 2011. 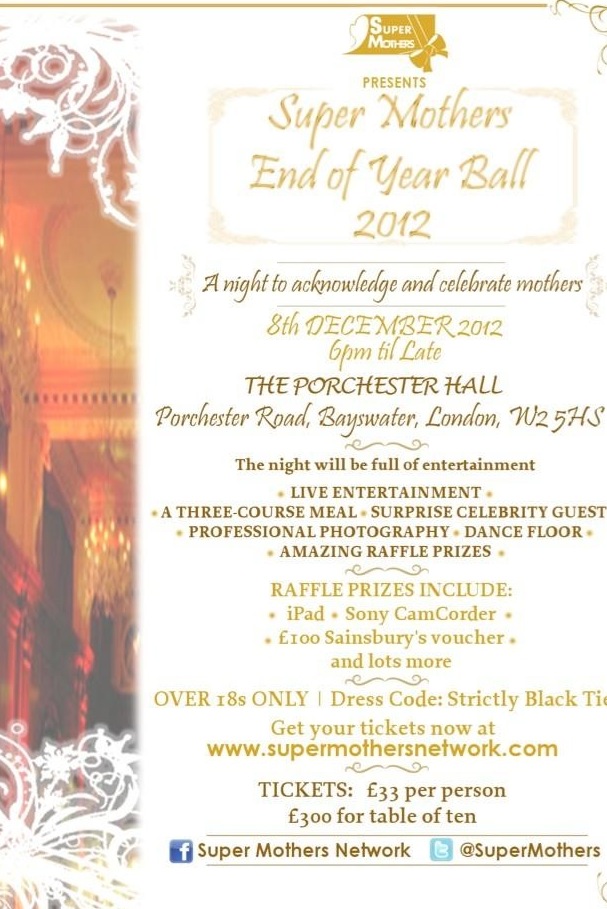 This grand affair will, as last year, see a three course five star ,sit down meal , live entertainment, along with music and networking opportunities at the picturesque Porchester Hall. Previously playing host to acts such as Lily Allen, Amy Winehouse , Status Quo and more. This stunning venue is the perfect setting for this prestigious event.


Last year's Super Mothers End of Year Ball raffle prizes included, a blackberry smartphone, a HD TV and much more. In the name of excellence this year's prizes include £100 Sainsburys vouchers, a Sony camcorder , an Ipad and even more delights.

"The Super Mothers Network has blown up in such a                               short period of time, the beautiful thing is some members are not even mothers, the way the men are strongly supporting the network is shocking in a very good way. The team and volunteers are phenomenal, it’s a blessing to be associated to people who just give their time to help Super Mothers to make an impact. I am overwhelmed by the whole thing.”